Monsignor João S. Clá Dias is an honorary canon of the Papal Basilica of Saint Mary Major in Rome, and Protonotary Apostolic. He is the founder of the International Association of the Faithful of Pontifical Right Heralds of the Gospel, of the Clerical Society of Apostolic Life Virgo Flos Carmeli, and of the Feminine Society of Apostolic Life Regina Virginum, entities of pontifical right, active in 78 countries.

This lively faith manifested itself early in João. In school, he sought to organize a movement among his classmates to help young people practice a virtuous life. He joined the Marian Congregations, and at the invitation of a teacher, entered the Third Order of the Discalced Carmelites of the Strict Observance, on May 23, 1956 in the city of São Paulo. This event deeply marked his life.

He completed his secondary studies at Colégio Estadual Roosevelt and studied law at the prestigious Largo de São Francisco Faculty in São Paulo. During his post-secondary studies he shown as an active Catholic university leader, in the turbulent years preceding the Sorbonne revolution of May 1968.

Seeing music as an efficacious means of evangelization, he refined his musical gifts with renowned maestro Miguel Arqueróns, conductor of the Paulista Choir of the Municipal Theatre of São Paulo.

His ardent desire to dedicate his life to the apostolate, in faithfulness to the magisterium of the Chair of Peter as well as his insight into the need for solid doctrinal foundation, led him to the study of Thomistic theology with the renowned university professors of Salamanca (Spain), including Fr. Arturo Alonso Lobo, OP, Fr. Marcelino Cabreros de Anta, CMF, Fr. Victorino Rodríguez y Rodriguez, OP, Fr. Esteban Gómez, OP, Fr. Antonio Royo Marin, OP, Fr. Teófilo Urdánoz, OP, and Fr. Armando Bandera, OP. Years later, in a gesture of profound 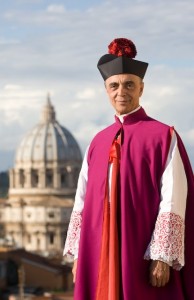 gratitude, he wrote short biographies on two of his mentors with editions published in Spain and the United States: “Antonio Royo Marin, master of the spiritual life, brilliant preacher and renowned author”, and “Fr. Cabreros de Anta, CMF, A solid pillar of Canon Law in our century.”He has degrees in Philosophy and Theology from the Italo-Brazilian University in São Paulo and a Humanities Doctorate from the Pontificia Universidad Catolica Madre y Maestra, in the Dominican Republic. He also has a Doctorate in Canon Law from the Pontifical University of St. Thomas Aquinas (more commonly known as the Angelicum), in Rome; and in Theology from the Universidad Pontifícia Bolivariana, in Medellin, Colombia.

His desire for perfection spurred him to initiate a provisory attempt at community life in a former Benedictine edifice in São Paulo, in 1970. Of those first companions, none persevered. Yet, after numerous adversities, the community took root and blossomed into an evangelization movement headed by Msgr. JoãoClá. From this founding house developed many others, in which members dedicated themselves to prayer and study in preparation for works of evangelization.

This took the juridical form of a Private Association of the Faithful, the Heralds of the Gospel, in the diocese of Campo Limpo (Brazil). With its implantation in an additional 20 countries it was recognized by the Pontifical Council of the Laity, on February 22, 2001, as an International Association of Pontifical Right. Today it carries out activities in 78 countries on five continents. Msgr. João Clá Dias is the current Superior General of the Heralds of the Gospel.

He also established a feminine branch of the Heralds – in a similar manner but independently from the masculine branch – with the ideal of community life as a means of achieving sanctity and worthily preparing for the evangelizing mission. From the feminine branch arose the Society of Apostolic Life Regina Virginum, which was recognized on April 4, 2009 by the Holy Father Benedict  XVI.

Inspired by a desire for greater dedication to Our Lord and his brethren, Msgr. João Clá prepared for the priestly ministry along with some of his companions. Because of the role which the Third Order of Carmel played in the founding of the Heralds of the Gospel, it was a Carmelite prelate, the Most Rev. Lucio Angelo Renna, then Bishop of Avezzano, Italy, who welcomed the first priests of this Association.

They – including Msgr. João Clá – were ordained on June 15, 2005, in the same Carmelite Basilica where almost 50 years previously Msgr. João had begun his activities at the service of the Church and his fellow Christians. The ceremony was honored with the presence of Cardinal Claudio Hummes (Prefect Emeritus of the Congregation for the Clergy). Seven bishops concelebrated the Eucharist along with seventy priests.

He has written widely distributed works (some surpassing one million copies), published in Portuguese, Spanish, English, Italian, French, Polish and Albanian: “Fatima, Dawn of the Third Millennium,” “The Rosary, the Prayer of Peace,”“Sacred Heart of Jesus, Treasure of Goodness and Love,” “The Miraculous Medal, its History and the Celestial Promises,” “Via Sacra,” “Jacinta and Francisco, the Chosen Ones of Mary,” “Daily Prayers,” “The Mother of Good Counsel of Genazzano,” “Dona Lucilia” and “Commentaries on the Little Office of the Immaculate Conception.” His doctoral thesis in Canon Law is entitled “The birth and development of the movement Heralds of the Gospel and its canonical recognition,” and the one in Theology is “The Gift of Wisdom in the mind, life and work of Plinio Corrêa de Oliveira.”

He is the founder of and regular contributor to the monthly magazine Heralds of the Gospel, published in English, Portuguese, Spanish and Italian, with a total circulation of nearly one million. Since 2002, he has written a commentary on the Gospel for each issue. He is also a regular contributor to the academic publication “Lumen Veritatis,” published by the University of the Heralds of the Gospel, which was inaugurated in October 2007, due mainly to his initiative.

With the necessity of the intellectual, spiritual and doctrinal formation of the Heralds of the Gospel in view, Msgr. João Clá founded the Aristotilean-Thomistic Philosophical Institute (IFAT) and the St. Thomas Aquinas Theological Institute (ITTA); as well as the St. Scholastica Philosophical-Theological Institute (IFTE) for the feminine branch.  In order to promote the development of vocations amongst youth, he encouraged the opening of secondary schools,amongst which the Colégio Arautos do Evangelho Internacional, in São Paulo was the first.

In an effort to enhance benevolent apostolic works, he created the charitable “Mercy” foundation, within the Heralds of the Gospel Association in Brazil. It gathers donations through mass mailings.

The construction of Our Lady of the Rosary Basilica, at the Seminary of the Heralds of the Gospel, is one of his most recent undertakings. The Monastery of Mount Carmel, of the Society Regina Virginum was recently completed, due, once again, to his untiring efforts.

Msgr. João Clá is a member of the Società Internazionale Tommaso d’Aquino (SITA), of the Marial Academy of Aparecida (Brazil) and of the Ponifical Academy of the Immaculate. He received awards from several countries for his cultural and scientific work, including the Medalha de Ciências of Mexico and a Doctor Honoris Causa from the Centro Universitário Ítalo-Brasileiroin São Paulo.

On the 15 of August 2009, the Holy Father Benedict XVI, in recognition of all the work carried out by Msgr. João Clá at the service of the Church, granted him the “Pro Eclesia et Pontifice” Medal, one of the highest honors awarded by the Holy Father to those who distinguish themselves by their endeavors on behalf of the Church and the Roman Pontiff. The medal was delivered to Msgr. João Clá by Cardinal Franc Rodé, Prefect of the Congregation for the Institutes of Consecrated Life and the Societies of Apostolic Life.Msgr. João Clá is also honorary canon of the Papal Basilica of Saint Mary Major in Rome, and Protonotary Apostolic.